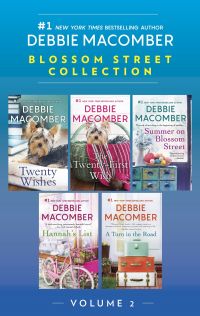 Welcome back to Blossom Street, a spot in Seattle where you can find anything you need, from flowers and yarn to friendship and a fresh start. Together in one value box set, five stories in the beloved series from #1 New York Times bestselling author Debbie Macomber.Twenty WishesAnne Marie Roche and several other widows get together to each begin a list of twenty wishes—things they always wanted to do but never did. When she volunteers at a local school, an eight-year-old girl named Ellen enters her life. It’s a relationship that becomes far more involving—and far more important—than Anne Marie had ever imagined.The Twenty-First WishAnne Marie Roche and her adopted daughter, Ellen, have had a number of their wishes come true. But Ellen quietly added a twenty-first wish to their special list: that her mom will fall in love with Tim, Ellen’s birth father, who’s recently entered their lives…Summer on Blossom StreetLydia Goetz, owner of A Good Yarn on Seattle’s Blossom Street, offers a class called Knit to Quit. It’s for people who want to quit something—or someone!—and start a new phase of their lives. When your life and your stitches get snarled, your friends can always help!A Turn in the RoadIn the middle of the year, in the middle of her life, Bethanne Hamlin takes a road trip with her daughter, Annie, and her former mother-in-law, Ruth: three women driving across America. They have their maps and their directions—but even the best-planned journey can take you to a turn in the road. Or lead you to an unexpected encounter…Hannah’s ListOn the anniversary of his beloved wife’s death, Dr. Michael Everett receives a letter Hannah had written him. In it she reminds him of her love and makes one final request. An impossible request: I want you to marry again. And she’s chosen three women she asks him to consider. As he spends time with each of the women, he learns more about them…and about himself.