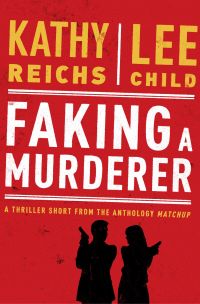 Jack Reacher walked out of the Baltimore bust depot into a world of frozen streets and dirty snow… In this short story from the thrilling anthology MatchUp, bestselling authors Kathy Reichs and Lee Child—along with their popular series characters Temperance Brennan and Jack Reacher—team up for the first time ever.

Kathy Reichs’s first novel Déjà Dead was a #1 New York Times bestseller and won the 1997 Ellis Award for Best First Novel. The Bone Code is Kathy’s twentieth entry in her series featuring forensic anthropologist Temperance Brennan. Kathy was also a producer of the hit Fox TV series, Bones, which is based on her work and her novels. She is one of very few forensic anthropologists certified by the American Board of Forensic Anthropology. She served on the Board of Directors and as Vice President of both the American Academy of Forensic Sciences and the American Board of Forensic Anthropology, and as a member of the National Police Services Advisory Council in Canada. She divides her time between Charlotte, North Carolina, and Montreal, Québec. Visit Kathy at KathyReichs.com.

Lee Child, previously a television director, union organizer, theater technician, and law student, was fired and on the dole when he hatched a harebrained scheme to write a bestselling novel, thus saving his family from ruin. Killing Floor went on to win worldwide acclaim. The Midnight Line, is his twenty-second Reacher novel. The hero of his series, Jack Reacher, besides being fictional, is a kindhearted soul who allows Lee lots of spare time for reading, listening to music, and watching Yankees and Aston Villa games. Lee was born in England but now lives in New York City and leaves the island of Manhattan only when required to by forces beyond his control. Visit Lee online at LeeChild.com for more information about the novels, short stories, and the movies Jack Reacher and Jack Reacher: Never Go Back, starring Tom Cruise. Lee can also be found on Facebook: LeeChildOfficial, Twitter: @LeeChildReacher, and YouTube: LeeChildJackReacher.